The Coral Sea Foundation and the Sea Women of Melanesia 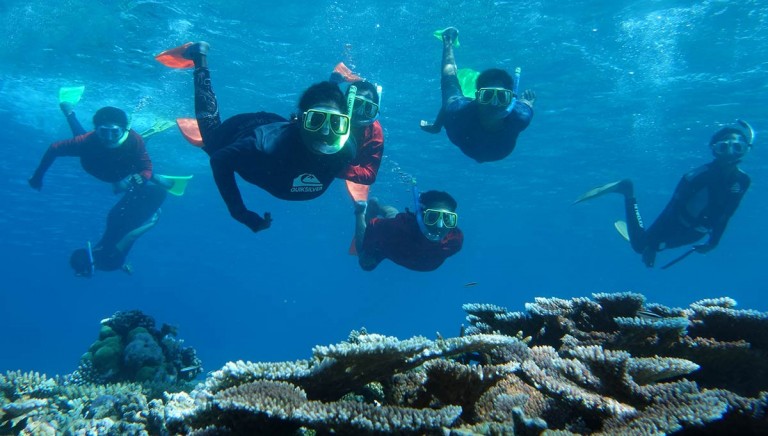 The Sea Women of Melanesia programme is supported by the Coral Sea Foundation, and is promoting sustainable tourism to the region by encouraging superyacht owners and captains to support these grassroots conservation measures.

Located on the east coast of Fergusson Island, the largest of the D’Entrecasteaux Islands in Papua New Guinea, sits Sebutuia Bay. Surrounded by volcanic mountains, verdant rainforest and harbouring some of the richest coral reefs in the Solomon Sea, it is one of the final frontiers known to man. It is also home to Lorie Pipiga, a young Melanesian woman with big ambitions.

In 2012, Dr Andy Lewis, founder of the Coral Sea Foundation and a leading ecotourism professional in the Indo-Pacific region, took a group of guests from luxury vessel True North ashore in search of the endemic Goldie Bird of paradise. But when they landed on the Sebutuian beach in the early hours of the morning, the typical village greeting of wide eyes and bright smiles was replaced with a huddle of bodies gathered around a new flat-screen TV. “The village had been paid off by an Indonesian logging company that had arrived in the bay,” says Dr Lewis despondently.

Equally as aghast by the devastating effects that logging is having on her native land, Lorie introduced herself to Dr Lewis. “I asked her what she wanted to do in life, and she said, ‘I want to study biology so that I can stop people like these loggers coming in and destroying the reef and the rainforest and everything in my area.

Dr Lewis and his team equipped Lorie with a passport and visa and brought her to Australia where she was trained to dive and conduct reef surveys using a timed-swim survey technique that can be done with simple equipment. “Papua New Guineans don’t have access to scuba gear or technical equipment,” says Dr Lewis, “but with a basic snorkelling set, these women can go out and perform an effective reef survey.”

On her return to Fergusson Island, Lorie met with her family and members of her clan group along the coast and explained the benefits of marine reserves. “We had all these landowners who could see that their fish catches were declining, and after hearing from Lorie, they all wanted to be part of a marine reserve network in that area,” says Dr Lewis. “It made me realise that training passionate, committed young women who are honest, hardworking and concerned about the environment was just a logical thing to do if we wanted to drive the marine reserve agenda forward.”

The Sea Women of Melanesia (SWoM) programme was launched in 2017. To date, it has trained around 28 women across Papua New Guinea and the Solomon Islands, and delivered first aid and medical supplies to more than 12 communities. Women that show a high degree of aptitude in the programme are also trained in the use of GPS-equipped underwater digital cameras that provide detailed images of reef condition.

There are currently 20 new proposed marine reserve areas that have directly or indirectly come out of the training programmes. It also works towards raising awareness of the benefits of educating women in developing countries, which can deliver a whole suite of positive environmental and social outcomes, explains Dr Lewis.

Alongside the work being directly undertaken by the Coral Sea Foundation, Dr Lewis is promoting sustainable tourism to the region by encouraging superyacht owners and captains to support these grassroots conservation measures. “A visiting superyacht leaves almost no impact,” he explains, “because we’re not anchoring on the coral reefs, and we can deliver large amounts of aid and support to the villages too, so it’s a win-win situation having a superyacht come into the area.”

Endless Summer is one such yacht whose owners have financially supported the SWoM programme and the wider conservation work being undertaken by the Coral Sea Foundation. “Dr Andy Lewis took us ashore for cultural experiences with the villages,” explains Tony Hodgson, captain of the 50m vessel. “We sat with him while he talked to the local villagers, which allowed us to understand what the Coral Sea Foundation was trying to do throughout the region.”

Having initially planned just two trips to the area, Endless Summer has since extended its itinerary to include a total of seven trips spanning a year and a half. By making financial contributions that are managed through the correct channels, the owners have helped to provide rainwater tanks, building materials, medical supplies, educational materials and clothing to the villages. Funds are also allocated to the SWoM programme.

“It’s only three days up to the Solomons and Papua New Guinea from Cairns in Australia, and the trip takes in beautifully protected, sheltered waters where you have your pick of anchorages, bays and beaches,” says Captain Hodgson. “The philanthropic aspect just becomes second nature once you see how the communities live, how happy they are with life, how little they actually have, and what a difference the simple gifting of medicine, rice, sugar and flour can make. We’ve now completed five trips, and on every trip, the owners have taken more interest and were right behind my suggestions.”

The Coral Sea Foundation is supported by the likes of the Super Yacht Group Great Barrier Reef, the Jock Clough Marine Foundation and the Unico Conservation Foundation, and in 2020 the SWoM programme achieved international recognition by winning the Ocean Tribute Award at Boot Düsseldorf. In conjunction with Craig de Wit at PNG Yacht Services, the Foundation has access to the 24m dive vessel Golden Dawn to advance its marine conservation work in Papua New Guinea and the Solomon Islands. It has another four expeditions planned over the rest of 2020, and Dr Lewis welcomes all superyachts and private sector entities who wish to support the Foundation’s PNG Marine Conservation Initiative.

“The ability to have a dedicated conservation vessel in that region is essential to make contact with remote island areas and deliver our aid material and training programmes,” explains Dr Lewis. “This work is not rocket science – it simply needs continued and repeated site access to be effective, and with the skills we have in our team and the vessels at our disposal, we are making it happen.”

This article originally appeared in The Superyacht Life: www.thesuperyachtlife.com