The AEC Group study found the Australian superyacht industry contributed a total of $1.97 billion to gross domestic product (GDP) in the 2016 financial year. The study was commissioned by AIMEX and supported by the Queensland government to gain a clear understanding of the superyacht industry’s current and potential economic contribution.

An Australian first, the economic impact study found the superyacht industry to be a high value niche sector, held back by restrictive policy – if relaxed, the industry could contribute an additional estimated $1.12 billion to GDP by 2021, for a total contribution of $3.34 billion.

“We’re calling for the Australian government to fix our legislation, so foreign superyachts have freedom to charter here, like they do in New Zealand. This would boost our local superyacht industry substantially – we could see an extra 8,100 local jobs making a total of 24,400 jobs by 2021,” said Ms Edwards. “We are seeking standalone legislation to relax regulations in the superyacht sector.”

Currently, very few international superyachts come to Australia because the current legislation makes charting in our waters unviable –  a superyacht must be fully imported and pay 10% GST on its value.

“After the devastation of Cyclone Debbie, a change is legislation is more important than ever to allow superyachts to cruise in Whitsunday region, to help local businesses and families get back on their feet.” said Ms Edwards.

“The superyachts spend up to $5000 with us in one hit – that’s just flowers, let alone meat and other produce – and we’re just a tiny shop that deals with them,” said Janal Casey, owner of Whitsundays florist Flower Hut.

“We desperately need the superyachts back this year – to boost our morale after the cyclone, give us jobs, spend some money and get tourists back to the town,” said Janal.

“It’s a huge business all around the world and it could be here too – the Whitsundays is just as nice as Monaco or Greece, where you’ll be tying up 30 to 40 superyachts in the major ports,” said Don Cameron, owner of Master Butchers.

“When the superyachts are restocking for a five or six week cruise, they spend anything from $5000 or $6000, right up to $18,000 on really good quality produce from our store.”

The study revealed for the first time a fuller picture of the economic benefits superyachts provide to the Australian economy, including:

Forecasts gross state product from superyacht industry in 2021, with and without policy change. 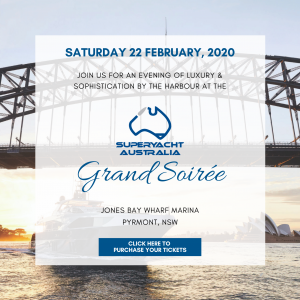