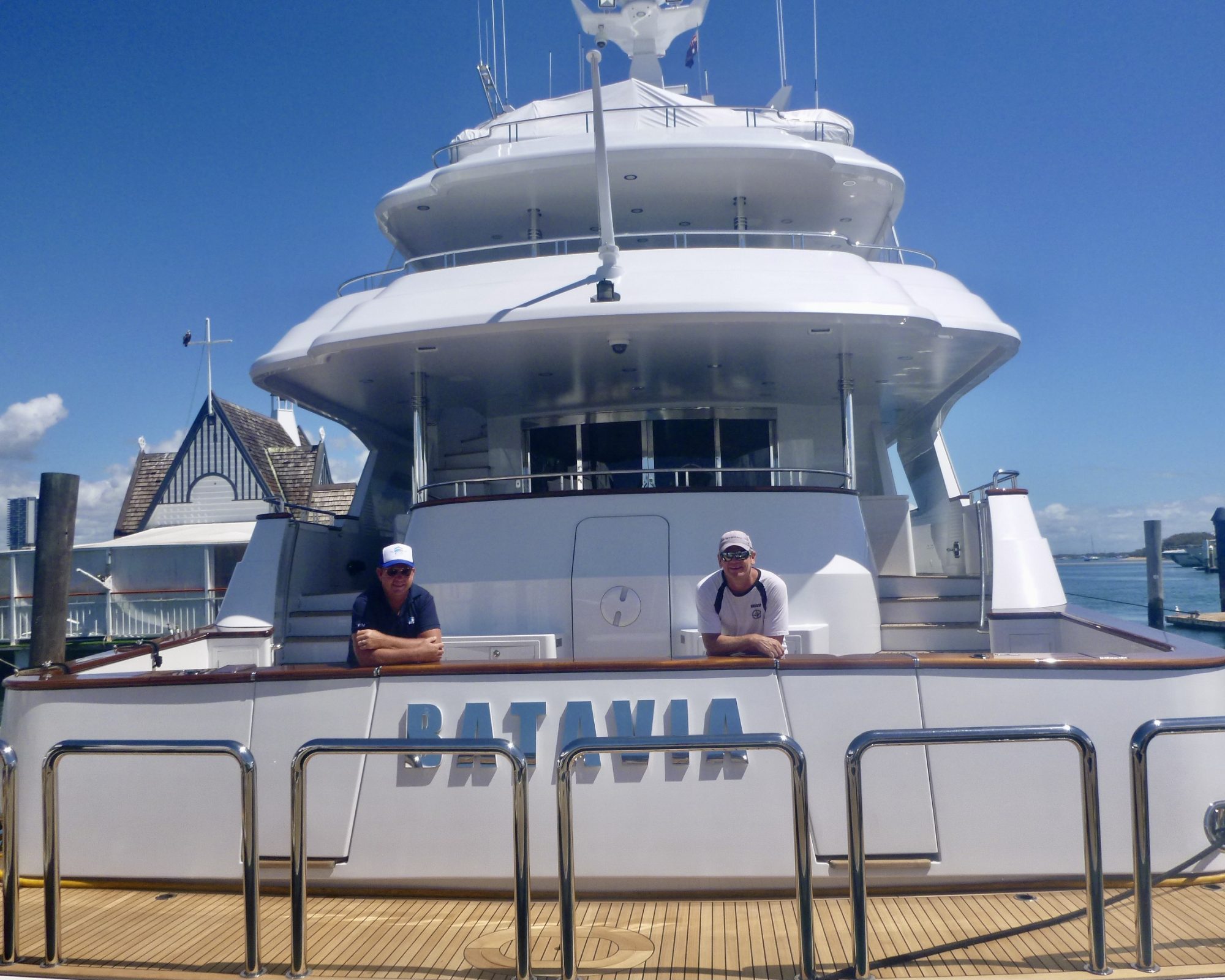 After more than five years exploring South-East Asia, the 41-metre Sovereign superyacht, MY “Batavia” chose to undertake a series of complex refit works at The Boat Works’ world-class superyacht yard.

Batavia is one of 47 superyachts of 24-metres+ from the Asia-Pacific and domestic Australian market to head to The Boat Works for service and refit projects since expanding its facility with the new superyacht yard in February 2020, attracted by the unrivalled array of skilled marine professionals on-site and Gold Coast’s largest boat lift at 300 tonnes.

Batavia’s owners had intended to travel to Auckland for the America’s Cup in March 2021, but their plans changed due to COVID19 travel restrictions.

Captain Mark Clacher has been the skipper for the owners for the past 16 years and at the helm of Batavia for six years, navigating the tranquil waters of Lankawi, Thailand, the Maldives, Indonesia, Cambodia and Borneo.

“The owners had cruised all of Australia and wanted to see all the wonderful islands on our doorstep, so we’ve been based in Asia for the past 5 and a half years,” he says.

When it came time to undertake repairs and some refurbishment, Captain Mark contacted Rod Twitchin, Director of RTMarine, based at The Boat Works.

Rod has had a long history with the vessels owner and crew and had overseen carried out the pre-purchase inspection on Batavia overseas six years ago.

“We could have stayed in Asia or chosen another yard,” says Captain Mark. “But Rod told us about The Boat Works’ new purpose-built Superyacht yard with 300 Tonne lift and all the facilities, so we headed to the Gold Coast.”

Batavia’s upgrades included an array of engineering works, plumbing and air-conditioning, antifouling and underwater lighting installs, refinishing works of the superstructure along with various interior and exterior refurbishments.

“Superyacht Solutions was delighted that a valuable customer of many years standing recently provided an opportunity to utilise The Boat Works’ spectacular new facilities.

“The hospitality and co-operation of The Boat Works’ staff were a boon to captain, crew and painters alike. We congratulate and commend The Boat Works on the thought and effort that has obviously been involved in the development of the new facility.”

“The biggest challenge was working to the tight deadline of seven weeks, which is often the case with commercial and privately-owned vessels. But we all collaborated and got it done.”

Captain Mark and his crew of four have enjoyed their stint on the Gold Coast, commenting on the laid-back lifestyle, spectacular beaches and waterways, idyllic weather and warm hospitality at The Boat Works.

“The marine facilities are fantastic,” he adds. “With efficient and top-quality trades that are centrally located, along with the convenience of a well-equipped Chandlery onsite proving to be very handy.

“The Boat Works’ yard is impeccably clean, with landscaped gardens and highly competent staff. Nothing is too much trouble. We were welcomed and given access to the resort like Captains’ and Crew Lounge, which was impressive.”

“The Gold Coast has become the recognised marine industry epicentre, directly employing around 10,000 people,” explains Shane Subichin, General Manager at The Boat Works. “The Boat Works has evolved to become the largest and comprehensive boating facility in the southern hemisphere.

“Superyachts are advantageous to boost our local economy and the revenue flows on to hundreds of suppliers and contractors across Queensland and northern NSW.

“They typically stay a month or two and can involve 20 to 50 contractors over the course of their works. Their Captains and crew enjoy weeks of R&R on the Gold Coast, seeing the sights and spending. Before they head off, they restock provisions and essential items.”

The Captain and crew of Batavia are looking forward to their next trip, and equally, getting back to The Boat Works in early 2021.

“After this first lot of works, we’ll be travelling south to Sydney for Christmas and New Year’s Eve celebrations,” says Captain Mark. “We’re very happy with the service and standard of work here. Everything has run smoothly and to budget. We’ll be back in early 2021 to complete the rest.”

After their next stint at The Boat Works, depending on restrictions, the owners of Batavia are hoping to travel to New Zealand and perhaps return back to the South Pacific and beyond when the time is right once again.