Home » News » The Scimitar brand of catamarans is poised for renaissance

The Scimitar brand of catamarans is poised for renaissance 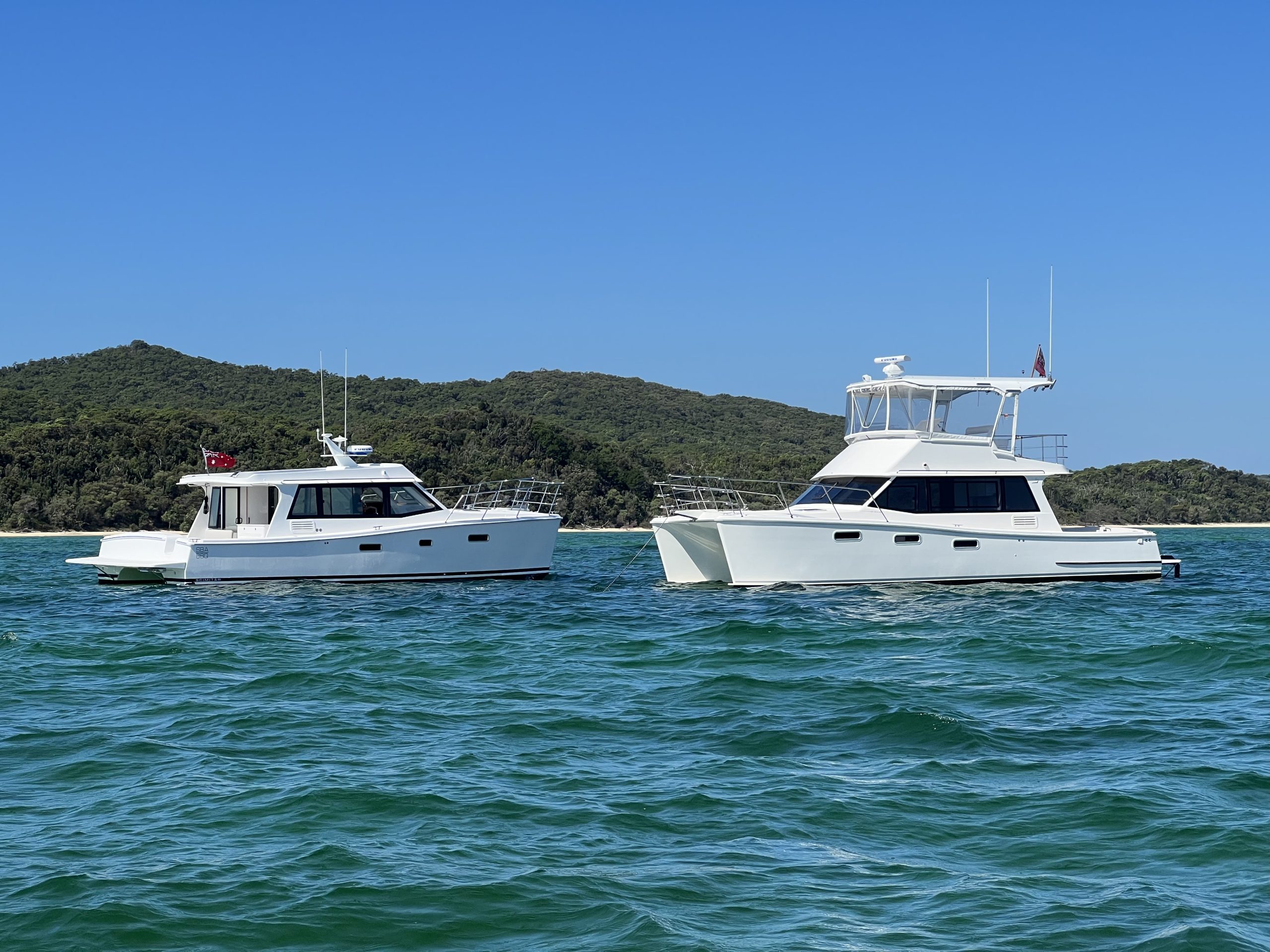 Scimitar, the iconic Australian multihull brand which flourished from 1997 to 2012, has been re-imagined and re-engineered by some of the country’s leading naval architects and ship builders. Tommy Ericson, CEO of the Aus Ships Group, based at Rivergate Marina & Shipyard, Brisbane, is the creative impetus behind the project and Director of the newly formed Scimitar Catamarans. The multi-awarded Ericson said he was inspired to revive an updated version of the Scimitar 1010 because of his own experience with the brand and his close ties with the co-founder, Bryan Bradford.

The Scimitar 1010 was the brainchild of two experienced boaters and businessmen, Bryan Bradford and Greg Byth. They took their concept to the esteemed catamaran designer/builder, Peter Brady to bring their ideas to fruition and the first boat entered the water in 1997.
That year, it won Australian Boat of the Year and attracted a larger number of orders. Unique in the marine industry, the Scimitar 1010 Flybridge was the brand’s single model, named for its 10.10 metre hull length.

Up until 2012 when manufacturing ceased, 65 units of the Scimitar 1010 were built for Australia private and commercial clients, as well as number exported to the US and South Pacific. “Having known Bryan for many years, our conversations always came around to the Scimitar and how successful it had been,” Ericson explained.

“I spent some time sketching ideas for how to ‘modernise’ the boat and bring it into the current day, whilst still maintaining the classic, non-pretentious look, feel and practicality. This led to our acquisition of Scimitar, the moulding, tooling and technical files relating to the construction.”

Concurrently, Ericson located a second-hand Scimitar in Papua New Guinea and purchased it as a test platform to implement the upgrades and improvements he had in mind.

“Doing the delivery voyage from Port Moresby to Brisbane in 2018 through some challenging conditions gave me the real-world experience and exposure to the performance and capability of the vessel.”

As Ericson attests, catamarans are enjoying record sales, as Australians realise their Bucket List dream to get out on the water and make memories with their families in a safe, secure “bubble” enjoying the “blue therapy” benefits of stress-free time surrounded by nature.
“Having worked in the industry for 25 years, and boated on all manner of boat types, I have always had an appreciation for catamarans. They offer great stability, an extra-large platform, shallow draft and are very efficient.”

Queensland is the gateway to east coast cruising and the glorious Whitsundays and Ericson sees great potential for Scimitar in its home market.

Aiming for re-launch in 2022, with their official debut at the Sanctuary Cove International Boat Show, Scimitar Catamarans will present two models and 3 layouts initially.

“One of the advantages of having a Marine Design Studio in house is that we have had the ability to workshop and develop and number of concepts efficiently and effectively without the need to engage external consultants and incur significant cost,” said Ericson.
“We presented concepts to the existing Scimitar owners’ network which resulted in the two models. The 1010 flybridge is similar in look and configuration as the original boats with a number of improvements in equipment, construction methodology and subtle styling upgrades.
“The second model is a modern twist on the ‘Moreton Bay Cruiser’ which is essentially a 1010 sedan without the flybridge. The saloon layout has been flipped from the flybridge model offering an open-plan layout with lower helm station.

“A lower air draft, due to the removal of the flybridge, will appeal to those needing to pass under bridges or not wishing to scale the flybridge ladder.”
The flybridge hardtop or the upper utility deck in the case of the sedan, accommodates a significant solar array of up to 1,500 W which provides self-sufficient, silent and environmentally friendly operations without the need for a generator. At a cruise speed of 16 knots, the 1010 sedan uses less than 30 litres per hour total fuel consumption making them not only cost effective to run but extremely environmentally conscious for a vessel of its size.

There are currently three vessels in various stages of construction: Hull 66 is the new model sedan being built as a demonstrator, Hull 67 is a flybridge model on order for an Australian client and Hull 68 is a flybridge model being built for an existing Scimitar owner.
According to Ericson, the vessels will be suited to the private and bare boat commercial markets. Several popular Scimitar 1010 power cats currently operate in the Whitsunday charter market.

“They’re ideally suited to families and those seeking a stable, safe and very efficient platform with superior seakeeping capabilities.
“They will provide good cruising speeds of 15 to 20 knots, two double cabins and two single bunks, large modern galley and a spacious, unobstructed cockpit for entertaining. Fully-protected propellers and a draft of 1-metre mean that owners can access places normally only available to trailer boats.”

Key to the promotion and uptake of the new generation Scimitar is the existing network of owners, and the tremendous goodwill the brand enjoys in boating circles.

“There is a great deal of interest in the new models,” said Ericson. “We’ve had excellent response so far. The brand is well regarded, and former owners have wonderful memories of their Scimitar cruising adventures. It makes sense to ride that wave of positivity and continue the tradition.”

The Scimitar 1010 sedan and flybridge models will be on show at the 2022 Sanctuary Cove International Boat Show, 19 to 22 May on Queensland’s Gold Coast.