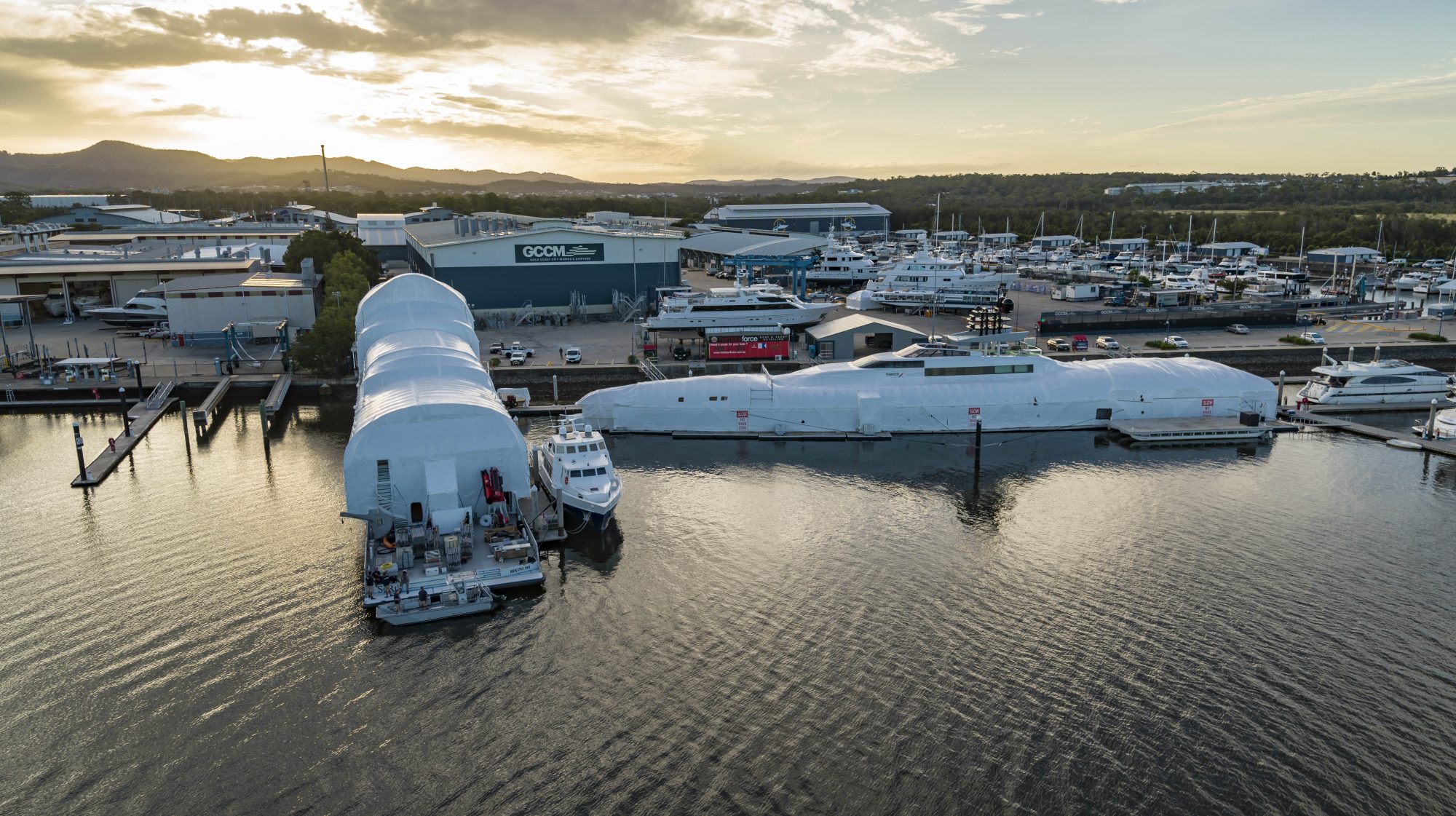 Both projects and the award win come as GCCM announced it can now cater for yachts up to 120 metres having now partnered with a complementary marine service facility – the Pacific Marine Base (PMB) on the Brisbane River at Murarrie.

GCCM CEO Trenton Gay says that while on-water superyacht refinishing projects were commonly used in European and American shipyards, this was the first time projects of this scale and complexity had been successfully delivered in Australia and were groundbreaking for GCCM’s ever evolving and expanding marine re-fit and repair capabilities.

“Worldwide it is well known that re-painting sizeable yachts presents numerous challenges for captains and crews with regards to sourcing shipyards with the right capabilities and being able to undertake mammoth paint projects in a timely and cost-effective manner,” Mr Gay said.

“Painting large-scale yachts on-water is arguably the ‘silver bullet’ of the marine re-fit and repair industry because it alleviates the need to lift the vessels out of the water while also allowing crew to stay on board and other interiors or motor maintenance work to be progressed at the same time representing wins all-round,” he said.

“We are incredibly proud of both projects, which employed the talents of over 200 marine tradespeople and have exponentially expanded GCCM’s superyacht capabilities and exceeded the expectations of both captains and crews thanks to seamless delivery.

“We are now in talks with many superyacht captains and crews from all parts of the world keen to bring their vessels to our GCCM facilities for similar re-paint projects and also capitalise on the attractive exchange rate of the Australian dollar.

“With the addition of our Murarrie superyacht re-fit facility, we are looking forward to welcoming yachts of up to 120 metres from all over the globe.”

The ambitious and challenging projects for Dragonfly and SuRi used a series of purpose-built pontoons to allow GCCM’s project management team to create stable and secure platforms around both yachts.

For Dragonfly, traditional scaffolding was erected and the entire structure wrapped to fully encapsulte the vessel to allow for a perfect paint finish and ensure that no contaminants entered the waterway or surrounding air.  While the paint job was underway, GCCM’s project management team coordinated an extensive engineering and internal re-fit of Dragonfly by scheduling on-site marine trades in and around the complex paint works.

SuRi’s work used a Layher cantilevered scaffolding system to cater to the shape of the yacht’s structure whereby the scaffolding was constructed top down as opposed to base up with the vessel then fully encapsulated like Dragonfly.

Dragonfly’s Director of Maritime Operations,Captain Mike Gregory said this wasn’t the first time they had been been so well looked after by the expert team at GCCM.

“And, it certainly won’t be the last,” Captain Gregory said.

“Congratulations to the whole team involved on winning the award, very well deserved,” he said.

“The in-water work to refinish the entire hull after sustaining some topcoat abrasions from floating debris was a unique challenge and the professionalism, solutions and workmanship were all of the highest order and the finish superb.”

SuRi Captain, Clinton Roos said GCCM’s support throughout the project had been second to none.

“I have been in GCCM since February and before COVID-19 became an epidemic with the intentions to do a full vessel spray-paint alongside the marina dock and in the water. On its own this project would be a feat and a first for any Australian marina or shipyard,” Captain Roos said.

“Thereafter, and once the Covid 19 epidemic hit Queensland, GCCM truly went out of their way to not only ensure the safety of all the crew and the vessel but to make sure that our project was never stopped, slowed down or hindered in any way.  These are merely a few reasons I believe that GCCM’s facilities are truly unrivalled, making it a crew, captain and owners dream.”

Based on these two successful projects, Australian local and state government authorities have, for the first time, issued an Environmental Authority (EA) for GCCM to be able to undertake such projects on an ongoing basis which spells exciting news for Australia’s superyacht capabilities and the global superyacht fleet needing viable locations to undertake complex paint projects.