SUPER SUMMER OF SUPERYACHTS AT RIVERGATE 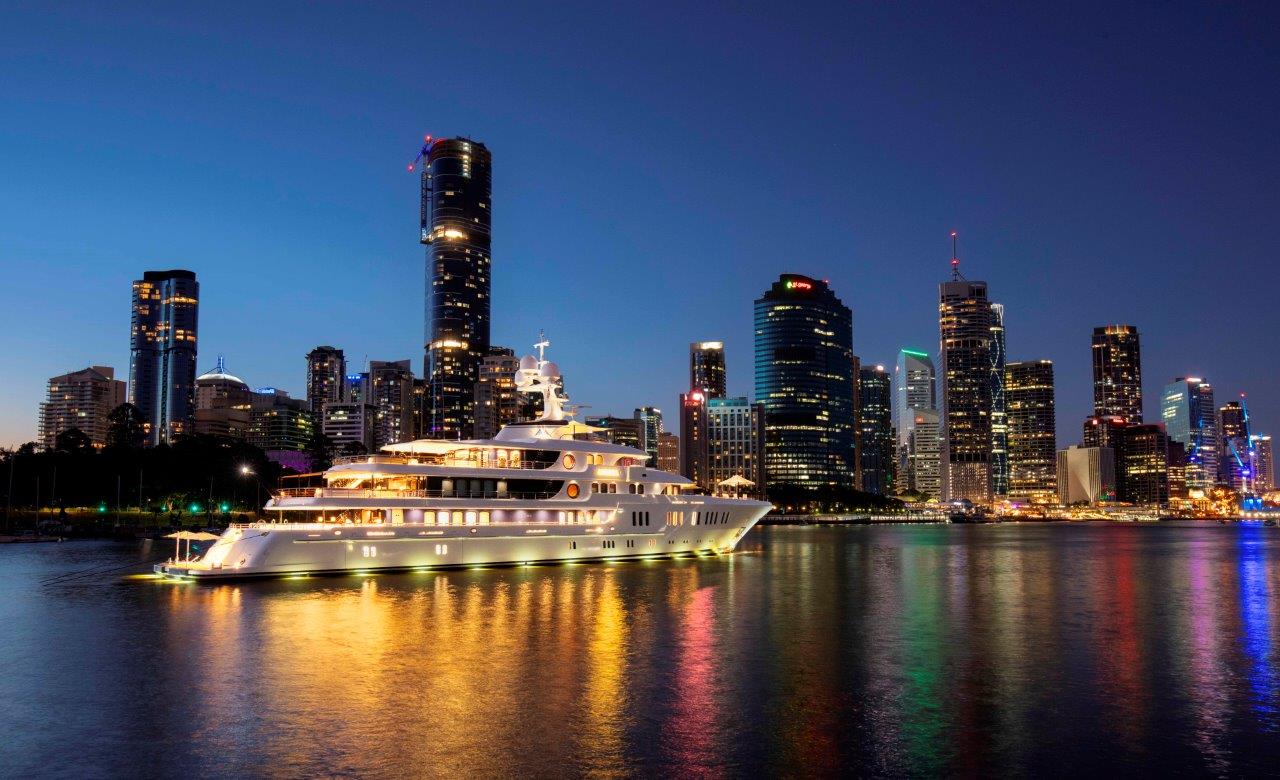 Following in the wake of 74m (243ft) Lürssen-built MY AURORA, the equally impressive 65m (214ft) Feadship MY CALLISTO travelled to Brisbane last week, stopping at Rivergate Marina & Shipyard for maintenance and repairs.

The pride of its Barbados-based owner, CALLISTO caught the attention of residents and media in Brisbane, cutting an elegant profile against the city skyline while her guests and crew enjoyed exploring ‘River City’ and its environs.

“We are thrilled to welcome these high-profile superyachts to Rivergate,” said Andrew Cannon, General Manager at Rivergate.

“From here, they can experience Brisbane, Moreton Bay and then further afield, north to the Whitsundays and Great Barrier Reef, or south to Sydney and Melbourne.” 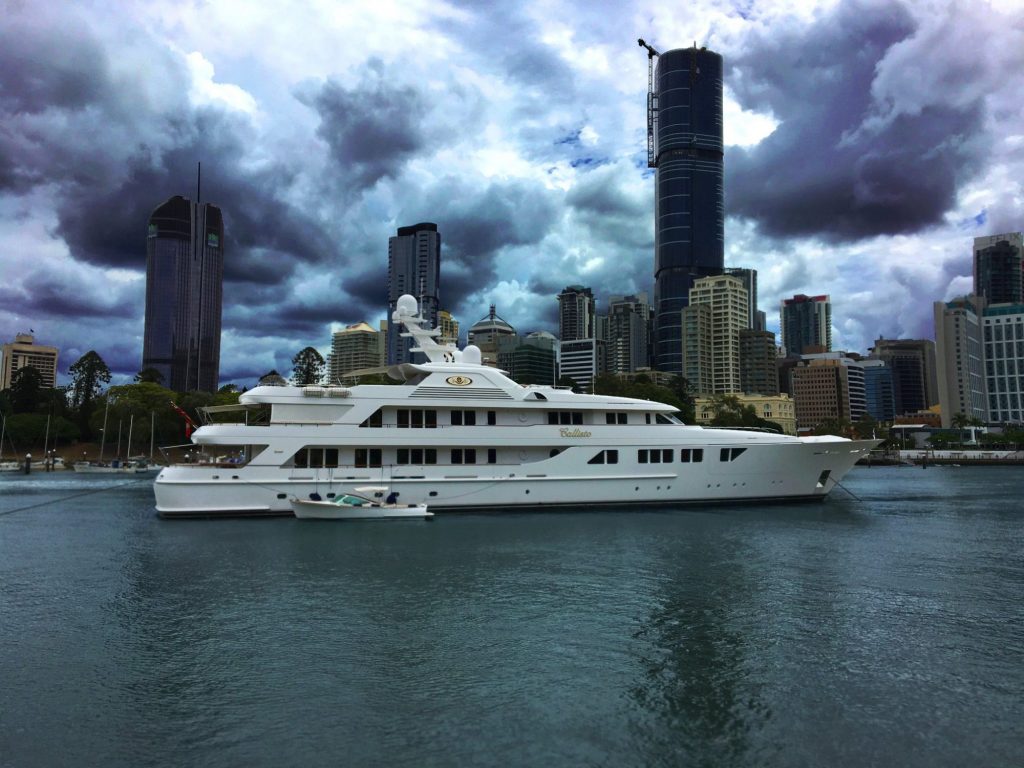 David Good, CEO at AIMEX-Superyacht Australia said “Crew and guests really enjoy the city of Brisbane and being in close proximity to the restaurants and night life, deep river and superyacht in the middle of the City, Kangaroo Cliffs and Botanic Gardens.

“Brisbane is a thriving metropolis, and the CBD is alive at night and during the daytime. That’s the competitive advantage that Brisbane has in the world and we should be leveraging it.

“These recent superyachts to visit Brisbane show that it’s a worthwhile activity for stakeholders to work together to make this mooring available to visiting superyacht year-round. Brisbane has the climate and the calendar of events to be a year-round destination.”

In December, 74m AURORA was the largest superyacht to make its way under the Story Bridge to moor at the City reach of the Brisbane River with the verdant backdrop of the Botanic Gardens and plenty of peace and privacy during their stay.

Following a successful summer sojourn taking in the wonders of Moreton Bay, then cruising along the east coast to Sydney and then on to Melbourne, AURORA returned to Rivergate Marina & Shipyard for a period of maintenance and repairs. 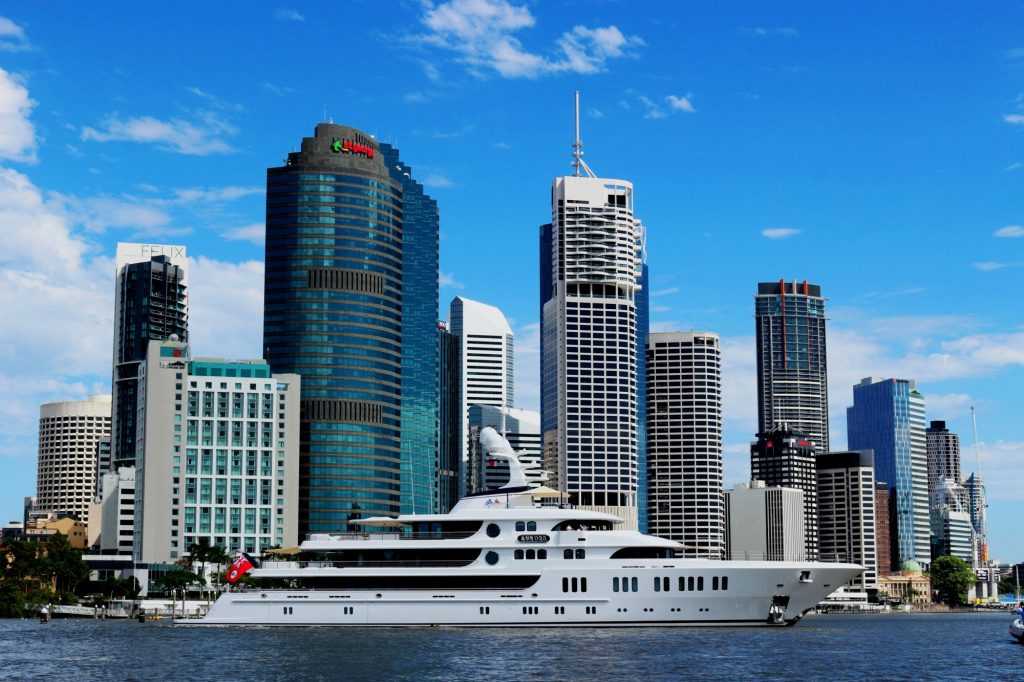 So impressed with Brisbane and Rivergate’s facilities and array of services were the owners, Captain and crew of this one-of-a-kind, five-deck, privately owned superyacht, they returned to Rivergate in February to complete various projects ahead of AURORA’S return to her European home-base, a voyage she is currently undertaking.

During her second stay at Rivergate, the specialist trades on-site attended to an upgrade of safety equipment, several engineering jobs and some minor interior work.

Since her launch in 2016, AURORA has cruised the Mediterranean and the Caribbean. In October, AURORA made the 12,000 nautical mile voyage to Australia virtually non-stop.

Her seven-week voyage to Brisbane began in Barcelona, continued to Albania, via the Suez Canal to Sri Lanka where they refuelled, then skirting Indonesia, around the top of the Gulf of Carpentaria and along the Queensland coastline to Rivergate Marina and Shipyard, located on the Brisbane River.

The 18-month old superyacht, which took three years to build, has massive fuel capacity of 240,000 Litres, giving it a remarkable range of 6,500 nautical miles, and a beam of 13m, making AURORA the largest volume superyacht in her class.

After her first experience of Rivergate where AURORA was prepared for her owners’ three-week itinerary south to Sydney and Melbourne, Captain Stephen Bay praised the exceptional team work, facilities and world-class skills available at Rivergate.

He mentioned that the owners were impressed with their mooring close to the City centre, with a picturesque backdrop of the Botanic Gardens, and Brisbane’s unique blend of country town charm and capital city amenities – namely the vibrant dining and retail scene, tree-lined streets and friendly locals.

In October 2018, Conde Nast Traveler named Brisbane and the Whitsundays as two of the world’s hottest destinations to visit in 2019. Brisbane was praised for its thriving cultural scene, events and amazing food and wine, while the Whitsundays were deemed the best islands in the South Pacific for their pristine beaches and variety of nature-based experiences.

After her spell in Brisbane, AURORA explored the natural wonders of Moreton Bay and its various islands, a one hour cruise from Rivergate.

“Moreton Island and in particular, Tangalooma were highlights,” said Rivergate’s Andrew Cannon. “It really is a cruising paradise on Brisbane’s doorstep.” 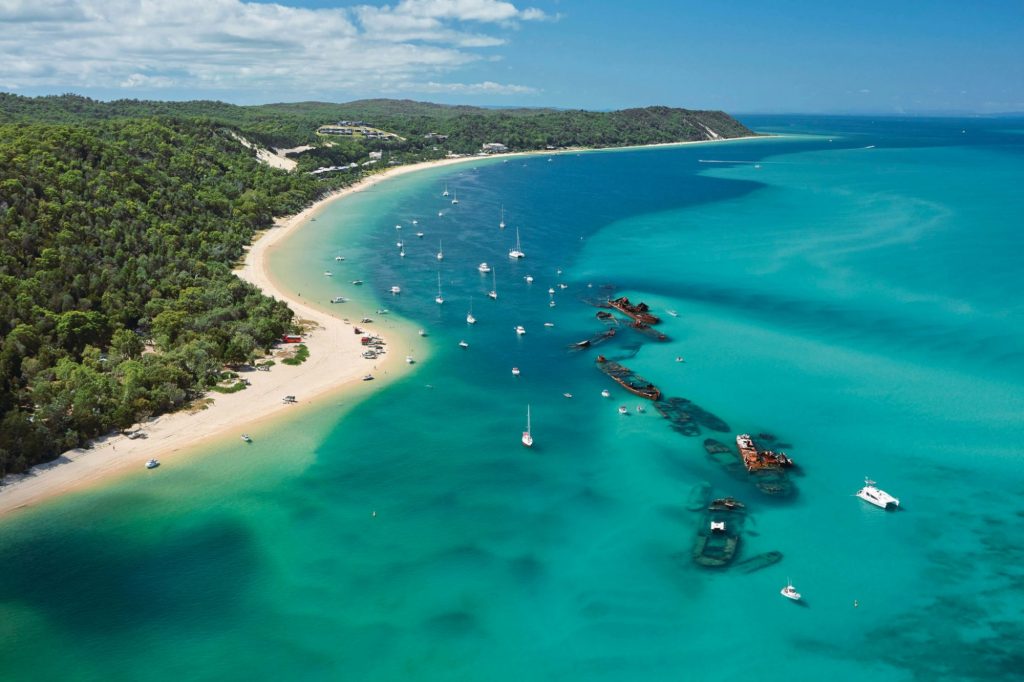 Covering more than 3,400km² (1313-square miles) of open and sheltered waterways, dotted with windswept islands, Moreton Bay was declared a Marine park in 1992 to protect ecologically significant habitats. It’s home to over one thousand species of fish, six of the world’s seven sea turtle species, three species of dolphin and the reclusive dugong (manatee), as well as various shark and ray species.

Awe-inspiring humpback whales travel 6,000km annually from their Antarctic feeding grounds along the eastern coastline of Australia to give birth in the tepid lagoons of the Great Barrier Reef in mid-June. After calving, from July, the humpbacks start their return south and many of them stopover in Moreton Bay where they can be seen frolicking with their calves until early November.

Other species known to visit Moreton Bay Marine Park include southern right whales and minke whales, along with large pods of coastal and oceanic dolphins all year round.

Despite its protected status, the region offers fantastic fishing and crabbing in the sheltered waters of the Pumicestone Passage and Moreton Bay and the ocean beaches of Moreton Island and North Stradbroke Island.

There are a phenomenal 360 islands in the bay, most deserted, several residential islands, among them Bribie Island, and others popular tourist hubs, such as North Stradbroke Island and Moreton Island – the world’s third largest sand island.

With an average depth of 6.8 metres, the calm and tranquil waters offer scuba divers and snorkelers great visibility, particularly around the submerged shipwrecks and reefs.

Considered “nature’s theme park”, Moreton Island offers protected anchorages and access to a diverse range of water and land activities: diving, snorkelling, bushwalking and quadbiking, which make it a magnet for visiting yachts. It’s also one of the only places in the world where you can hand feed wild dolphins who visit the shores of Tangalooma Resort each day.

Onshore, wallabies and kangaroos are frequent visitors, while several intriguing historic sites, including military fortifications and quarantine station at Fort Lytton and St Helena Island’s prison, are an alluring reason to scale the sand dunes and explore on foot, or Segway – the choice is yours.

“The Rivergate team has an unrivalled local knowledge, which we are only too happy to share with visiting superyacht Captains and crews. Whether that’s for crew breaks during a period of refit or maintenance, or advice on itineraries in our region,” said Andrew.

Since commencing operations in 2006, Rivergate has worked with more than 250 major superyachts and is renowned as the Captains’ and owners’ choice for service and refit. Rivergate was named in the Top 3 world’s best shipyard for refits, according to Captains and Crew, as reported in Boat International in December 2017.

Swell is up, wind offshore and water temp perfect

M/Y AU and her crew